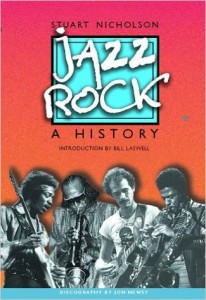 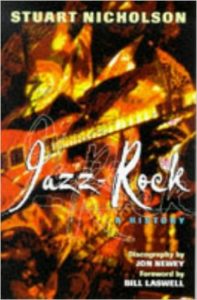 FINALIST IN THE 1999 ARSC AWARDS FOR EXCELLENCE IN MUSIC WRITING

‘Author Stuart Nicholson has come up with just about everything you ever wanted to know about the post-bop fusion jazz era…well written and detailed, the book is the first to provide such a thorough view of jazz in the crossover decades’. LOS ANGELES TIMES (USA)

‘It is safe to say that with the publication of British historian Stuart Nicholson’s latest book [Jazz-Rock: A History] most of the juvenile nonsense attending its rise to favor and the commercial motivations behind its incredible stranglehold on the music industry will be blown asunder. Author of biographies of Billie Holiday and Ella Fitzgerald, as well as Jazz: The 1980s Resurgence, Nicholson brings to his current subject the same degree of level headed scrutiny that characterises his early works. That he is well grounded in his material is obvious from his objective analysis of some hundreds of groups and some thousands of recordings. These well-knit and highly focussed discussions reveal not only a sincere interest in this once highly popular movement, but also Nicholson’s distant remove from anything resembling the self-serving, inflated hyperbole of both the performers and their market obsessed recording companies’. JAZZ TIMES (USA)

‘This is a wonderfully intelligent and comprehensive account …The importance of the book is not so much its well-researched background on each artist or group of artists, but more so the historical and social context of the music, and the identification of mutualistic influence between the bands.’ REVIEW CENTRE.COM (USA)

‘Jazz-Rock supplies the background for this vibrant musical evolution as well as behind the scenes nuts and bolts of the music business where art and mass marketing often collide’. LIBRARY BOOKNOTES (USA)

‘It is one of the most interesting and well researched books on jazz of the last thirty years I have ever read’. SPACE COAST PRESS (USA)

‘Nicholson has the musical skills to write authoritatively about the movement, and he writes with integrity and honesty…few jazz books are more balanced or more complete.’ NASHVILLE SCENE (USA)

‘Nicholson has the musical skills to write authoritatively…and he writes with integrity and honesty…He maintains that jazz-rock has been unfairly maligned by conservative jazz critics, but he also views the smooth-jazz phenomenon as the ultimate betrayal of the music’s initial promise. Few jazz books are more balanced or more complete.’ WEEKLY WIRE  (USA)

‘This is the best book written on the history of jazz-rock-fusion. Nicholson writes in great detail about the emerging jazz/rock scene in the early/mid 60s − a period many writers overlook − skipping directly to 1969 and Bitches Brew. Another writer/historian from the UK; they really do their homework!’ STEVE SMITH DRUMTALK.COM (USA)

‘In this encyclopedic work, Nicholson  chronicles the development of jazz-rock from the early interactions of jazz and rock in the 1960s–a time when jazz seemed to many to be at a dead end–to the present day. He emphasizes that the influences have been mutual: rock did much to revitalize jazz, but rock musicians have also learned from the jazz masters…[and] as a comprehensive overview his book succeeds’. PUBLISHER’S WEEKLY (USA)

‘A lively text’. THE PUBLISHER (UK)

‘Astute and honest’. THE WIRE (UK)

‘Nicholson must be praised for the high standard of writing throughout, which will continue to enhance his reputations as one of the best jazz-writers around.’ AMAZON.COM

‘Stuart Nicholson has gone about the task of writing the first major account of [jazz-rock] in his usual zealous, highly-informed fashion and brings an acute critical judgement rather than simply a fan’s enthusiasm to the task’. THE LIST (UK)

‘Stuart Nicholson’s exceptional and underrated study, Jazz-Rock: A History (Cannongate Books, 1998)…has immeasurably enriched [and] broadened  my understanding of the genre as a whole [and] I can heartily recommend [it].’ PAUL STUMP, GO AHEAD JOHN: THE MUSIC OF JOHN McLAUGHLIN  (SAF PUBLISHING, LONDON, 2000) (UK)

‘A truly indispensable book for anyone who wants to learn more about jazz than documentary film maker Ken Burns is willing to tell you.’ WALTER KOLOSKY, GIRLS DON’T LIKE REAL JAZZ: A JAZZ PATRIOT SPEAKS OUT (ABSTRACT LOGIX BOOKS, NEW YORK, 2004) (USA)

‘Recently, a variety of writers have begun to [consider] the musical characteristics and cultural politics of fusion, as well as its contributions to critical theory. Stuart Nicholson laid an important foundation for much of this work with his 1998 book through which he provides an encyclopaedic survey of fusion jazz from the mid 1960s to the mid 1990s.’  J. A. PHILLIPS, SOUND, MEDITATION, AND MEANING IN MILES DAVIS’S A TRIBUTE TO JACK JOHNSON, (PhD DISSERTATION, DUKE UNIVERSITY, PAUL BERLINER  SUPERVISOR, 2008) (USA)

Jazz-Rock: A History Has Been Cited In Numerous Degree, Doctoral Dissertations and Published Academic Papers Including*:

*Details from Researchgate.net and Academia.edu

BUY JAZZ-ROCK: A HISTORY FROM AMAZON