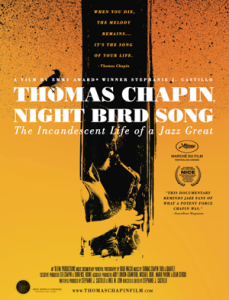 On 9 May 2016, Emmy award-winning filmmaker Stephanie J. Castillo’s music documentary Thomas Chapin, Night Bird Song: The Incandescent Life of a Jazz Great was screened at the Nice International Film Festival in France. It’s a jazz documentary that’s creating waves, just recently it was selected for a screening at the Monterey Jazz Festival on 18th September where it will be shown at 4.30 pm at the Jazz Theater.

The response to earlier previews  in Hartford, Connecticut and the SVA Theatre in Manhattan in March this year were were a positive indication that  Chapin’s story deserved to be heard. This was underlined by film’s potent seven minute trailer  that gives a foretaste  of what a well researched documentary Night Bird Song is as well as unveiling a rich vein of jazz that has largely been overlooked by the jazz world over the last two decades.

The film couldn’t come at a better time, since Chapin’s contribution to creative jazz has slowly been sliding out of sight since his death at the age of forty in 1998  from leukaemia. So it will come as a revelation to many to learn about a young “jazz great” from the not too distant past that history has somehow passed by.  Ironically, one of Chapin’s albums was called You Don’t Know Me, which for many jazz fans today is probably quite true.

For seven years in the 1980s, Chapin was a member of vibist Lionel Hampton’s big band as featured soloist, lead alto saxophonist and musical director. At first it seemed remarkable that Hampton, an internationally famous jazz star in his own right who had been leading a big band since the early 1940s, had ceded so much authority and responsibility to  a skinny young man with a pony-tail.  But it didn’t take long to realise why. Chapin’s musicianship and authority made it seem as if Hampton was a sideman in his own band — Chapin literally threw himself into the task, leading by example, his extravagant conducting and inspirational musicianship creating the kind of musical excitement Hampton seemed to thrive on. Clearly here was someone to watch. 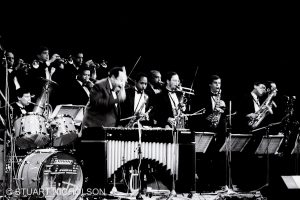 In 1989 he formed his own trio, and while sax, bass and drums can, after a while, leave the ear searching for the presence of piano or guitar,  Chapin, by the sheer extravagance of his talent didn’t give you time to contemplate the absence of harmonies. “I’m constantly amazed we can play anything,” Chapin said, “and people always seem to relate to it.”

As much at home in the then popular Downtown experimental scene centered around Michael Dorf’s Knitting Factory  at 47 East Houston Street, just below Greenwich Village, as he was in more mainstream contexts  like the Sweet Basil or the Village Vanguard in the Village itself,  Chapin was dedicated student of music. His studies embraced Brazilian/Afro-Cuban music, flamenco and gamelan while away from his trio, he could be heard collaborating with an Armenian oud player  or touring with blues legend Clarence “Gatemouth” Brown. To him it was all music, grist to his creative spirit.

A formidable soloist of  resourceful melodic invention, his playing, neither low brow or high brow, came straight from the heart. It goes some way to explaining how he’s still able to speak to us today and if Stephanie Castillo’s Night Bird Song succeeds in opening doors for audiences on this neglected jazz great, then her struggle to fund her remarkable documentary will be richly rewarded. 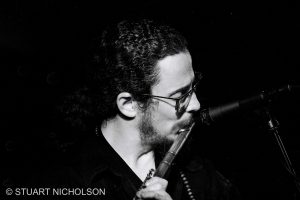