Al Jarreau, who began a full time career in music at the relatively late age of  28, died on Sunday 12 February 2017. Hospitalised for exhaustion two weeks earlier, he had cancelled his tour dates on medical advice and had withdrawn from touring, announcing his retirement just two days before his death. Although he began his career in jazz — which always remained his first love — his imaginative and virtuostic style crossed many arbitrary musical barriers, winning six Grammy awards in three different categories: jazz, pop and R&B. 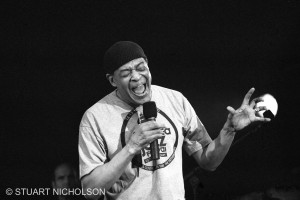 My interview with Al Jarreau in 2000 took place in his luxury suite in an expensive Kensington hotel. He had recently signed with the Verve label and I was there to talk about Tomorrow Today, his debut for the label, scheduled for release a few weeks later.  Prior to that, his last album had been Heaven and Earth on the Warner Bros. label back in 1992.  Jarreau was in expansive mood when I met him. A man of great charm and wit, our interview began with him expressing great respect for the Royal Family, his misgivings about Tony Blair and a whole lot else. By the time I managed to steer the conversation to Tomorrow Today he was in full loquacious flow and I took the opportunity of asking him  to outline how his remarkable cross genre career had developed. Tomorrow Today  would subsequently reach Number 1 on the Jazz chart, Number 14 on the R&B chart and 137 on the Pop album chart and it was this ability to appeal to such a broad audience with jazz based vocals and jazz vocal improvisations that fascinated me and was something I wanted to explore once the interview got underway.