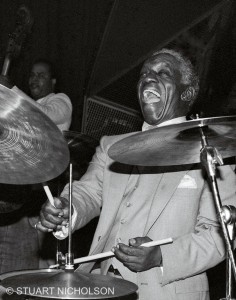 Hard Bop legend Art Blakey and his Jazz Messengers made any number of albums after his career defining period as a Blue Note recording artist in the 1950s and early 1960s. But perhaps the most important album of all his subsequent output, and certainly the most historically significant, was Keystone 3, recorded live at San Francisco’s Keystone Korner in January 1982. At the time, Blakey had the most exciting line-up of musicians since his 1959–64 Messengers with Lee Morgan and Wayne Shorter. On hand for Keystone 3 were Wynton Marsalis on trumpet, Branford Marsalis on alto saxophone, Bill Pierce on tenor saxophone, Donald Brown on piano and Charles Fambrough on bass. 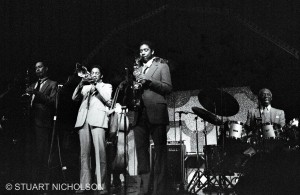 The core members of this band had been working together since Live at Bubba’s (1980) and had already produced a series of fine albums including Live in Sweden (March 1981), Album of the Year (April 1981) and Straight Ahead (June 1981), the latter also recorded at Keystone Korner. In the summer of 1981, Branford Marsalis, fresh from Berklee College of Music, came in for Bobby Watson and pianist Donald Brown replaced James Williams. By now smart lounge suits and ties had replaced the casual wear of the 1970s (when Blakey wore a pair of white dungarees). This was widely thought to be at the instigation of Wynton Marsalis, who when he joined Blakey did not know a lot about Blakey’s recorded legacy, “I remember James [Williams] would always tell me I needed to learn more Messengers music. I didn’t know   much of the Messengers music when I was in the band,” he is quoted as saying in Hard Bop Academy: The Sidemen of Art Blakey and the Jazz Messengers by Alan Goldsher. But he quickly made up for lost ground  so that by a late 1981 interview for Downbeat magazine the trumpeter was able to say, “I leaned a lot of stuff from [Blakey], but its not the kind of stuff you learn in school. Art Blakey never told me what scale to play…he’d tell me stories of Clifford [Brown]. I didn’t learn anything technical about the trumpet. I learned about playing music.”

An ongoing force in hard bop since the early 1950s, Blakey has a remarkable track record of discovering, nurturing and bringing to to the public’s attention some of the brightest young talent in jazz and the Marsalis brothers were no exception. When Wynton Marsalis emerged as a star-in-the-making in Blakey’s Messengers he seemed not only to be on the threshold of a  hugely promising career in jazz  but also there was a feeling that if he could fulfil  his obvious potential, then the future of jazz would be in good hands as well.

Yet Wynton Marsalis doesn’t dominate Keystone 3, Blakey achieving a remarkable balancing act between the three members his front line — the scholarly trumpet player, his free wheeling brother and the obvious maturity of tenor saxophonist Bill Pierce. Branford Marsalis has spoken of Pierce’s influence, both musically and philosophically, during this formative period of his career and that of his brother. Pierce went on to play in Tony Williams’ Quintet before entering academe as Woodwind Chair at Berklee College. On Keystone 3  he takes an assured and convincing solo feature on “In a Sentimental Mood.” 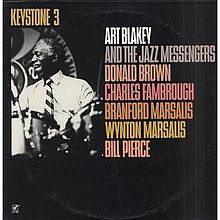 Wynton Marsalis had turned heads with a powerful solo on Wayne Shorter’s “One by One” on Blakey’s Album of the Year recorded in Paris in April 1981 and his striking assurance is carried over to his solo on “In Walked Bud,” a contafact of — or based on the same chords as — “Blue Skies.” However, his introduction of a growl effect during the theme statement adds a moment of stylistic incongruity that harks back to an earlier age (Bubber Miley then Cootie Williams with Duke Ellington) and hints at a lack of artistic maturity (he was only 20 at the time of the recording). “Fuller Love” had previously been recorded on Album of the Year as “In Case You Missed It,” but this is the most rounded performance of the two, with Branford Marsalis betraying a suggestion of Bill Pierce’s  influence  on his phrase construction (which is also apparent on “In Walked Bud” and “A La Mode”).

The album highlight is the Messengers’ performance of the Wynton Marsalis original “Waterfalls,” effectively a 15 bar blues in 12/8. The theme is cleverly written to suggest a stretto effect, which is implied by a sustained tone held by the trumpet against the descending tones of the saxophones. As with all the titles on this album, the ensemble playing is impeccable, the whole front line phrasing as one with careful attention paid to dynamics. Blakey’s rhythmic control — he was 63 at the time — is masterful here, and when the piece opens for solos, he effortlessly elides into a straight-ahead 4/4 feel.

“A La Mode” is a classic Messengers performance irrespective of era, and rounds out a wholly absorbing album whose significance today is somewhat overlooked. Although the Marsalis brothers were by no means the finished article when they left the Messengers later in 1982, they at least had been given a solid professional grounding by one of the great mentors of talent in jazz. It stood the trumpeter in good stead when George Butler of Columbia offered him a recording contract as both a jazz artist and a classical artist, with his jazz contract being fulfilled with his own quintet that had his brother on tenor saxophone. 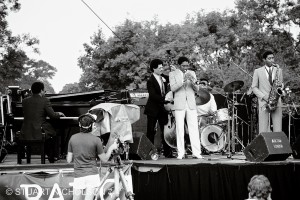 It is, of course,  tempting to speculate whether another year or so under Blakey’s aegis would have produced a more mature musician in readiness for such a significant career step change. Assigned high-powered publicist Marilyn Laverty, who clients included rock star Bruce Springsteen, Marsalis was soon figuring in style magazines, Sunday colour supplements and the arts pages of the broadsheets, a cynosure for a born-again jazz whose profile prompted other recording companies to sign similar wunderkinder. It left Keystone 3 as a crucial tipping point  in jazz history of the 1980s, in many ways a precursor of the “Young Lions” phenomenon of 1980s and 1990s. 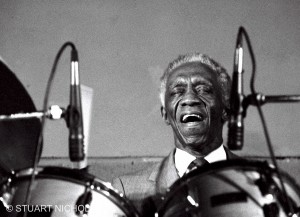