Arthur Blythe, one of the most admired alto saxophonists on the 1970s and 1980s, died on Monday 27th March 2017 at the age of 76 through complications arising from Parkinson’s disease. The father of three had been fighting the illness since 2005 and several benefits had been held for him in his home town of San Diego. A musician of broad scope that stretched  from  the avant garde to the mainstream of jazz. Possessor of an instantly identifiable tone, Blythe was a passionate and lucid player who had a very personal approach to improvisation that was edgy yet  melodic  in conception. 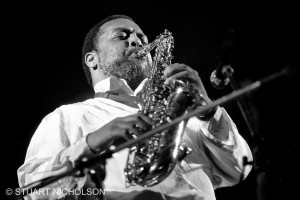 As “Black” Arthur Blythe he initially made his name on New York’s loft scene, recording albums such as The Grip and Bush Baby   after moving from the West Coast in the 1970s, garnering international recognition as a member of Gil Evans’ Orchestra on albums such as Priestess, At the Royal Festival Hall London 1978 and Live at the Public Theatre (Vols. 1 and 2) New York 1980. From 1976 to 1980 he appeared with Lester Bowie groups and with drummer and Jack DeJohnette — his appearance alongside David Murray on DeJohnette’s  Special Edition in 1979 especially memorable.

Blythe’s fast growing reputation came to the attention of Columbia Records, with whom he signed in 1979 and  debuted with an all-star pick-up band on Lennox Avenue. His subsequent work for the label was split between two bands: In the Tradition with piano, bass and drums accompaniment and his more avant-inclined guitar band with cello, guitar (with either Kelvyn Bell or James “Blood” Ulmer) and drums. In retrospect, splitting his playing “identity” between two bands was probably a mistake for a jazz public who like their heroes to come plainly labelled and by the time he realised his best shot was to concentrate on one band — In the Tradition — Columbia had signed Wynton Marsalis who in 1981 achieved the kind of breakthrough many had predicted for Blythe. 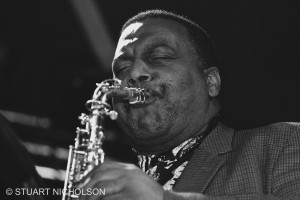 Blythe briefly flirted with smooth-ish  jazz — Put the Sunshine In It — at Columbia’s behest, telling the San Diego Tribune, “Commercial music isn’t about the cutting edge; it’s on the subdued edge, the dull edge. The word ‘commercial’ means something that’s acceptable [to the masses], and makes money. But I love all music, including that which is called ‘commercial music.’ As the youngsters say, ‘It’s all good’ — or can be.”

Jazz was Blythe’s calling, however, and in 1984 he joined  The Leaders led by Chico Freeman that had some success on the European festival circuit, and another Freeman led band, Roots in the 1990s. He returned to San Diego, the town in which he grew up in 1998, where he lived with his three daughters and mother Nancy, for whom he once penned an original, for several years before moving to the Los Angeles area. Blythe’s final San Diego concert was in 2001, at the Athenaeum Art Studio in University Heights and his final album Exhale was released in 2003, two years before Parkinson’s Disease struck. In 2015, he was honoured with a tribute concert as part of the annual Angel City Jazz Festival in Los Angeles, which he attended in a wheelchair.