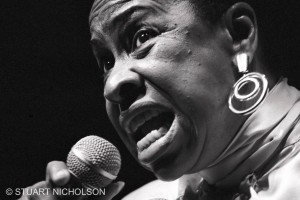 Around the time The Audience With Betty Carter was recorded at Bradshaw’s Great American Music Hall in San Francisco in December 1979, a feature in the Village Voice  feared she may die an unknown genius. Throughout her life she had refused to succumb to the blandishments of commerce or the conceits of record producers while relentlessly perfecting an individual style wholeheartedly in the jazz idiom. ‘I’m not supposed to have a hit record,’ she told me in an interview in August 1990. ‘I’ll stay with that and be happy rather than compromise.’ That unequivocal stance had its price.  Considered uncommercial by record companies, she had survived the 1970s by working to an audience she had developed through her memorable live performances and her own Bet-Car record label (who released The Audience in the early 1980s). 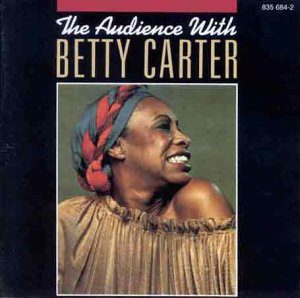 In the 1950s and 1960s she had made several recordings, but her best were taken from live performances, such as Finally…Betty Carter (1969), Round Midnight (1969) and Now It’s My Turn (1976), that reveal the central elements of her style were coalescing, not least her ability to handle the most excruciatingly slow tempos  and contrasting them with the fastest in jazz plus a highly individual vein of scat singing that transformed a song both melodically and rhythmically into an extension of her own musical personality. Live she displayed a vitality her studio works lacked, creating an aural drama that was underlined by a very personal line in choreography.  Yet nothing in those albums prepares you for the sheer drama and creative energy unleashed during The Audience, recorded just three years after Now It’s My Turn. On this album it is indeed possible to conclude Betty Carter was the greatest jazz singer of them all.

The Audience opens with ‘Sounds,’ a 25 minute 20 second tour de force, not just of extraordinarily inventive scat singing but it also stands as a remarkable — yes remarkable — exploitation of of contrasting metre and rhythm to create  a performance that in its cohesive trajectory produces something truly memorable in the history of jazz singing.

Normally, when a vocalist starts scatting it’s time to head for the bar, but not so with Miss Carter. Throughout she holds centre stage — there are no solos by her trio except when she takes her deserved bows at the end — otherwise she is out on the high wire on her own. The piece opens with a piano ostinato which quite literally ‘vamps till ready’ in 4/4, the song opening as she sings ‘Sounds,’ whose  form is ABAB with A comprising 28 bars and B 10 bars, and an open scat section based on time, no changes. After each scat episode, she cues  the B section,  the song’s lyrics indicating she is literally ‘Moving On’ to the next episode, and a different tempo and often metre.

On the second episode Miss Carter and her trio move into the slower metre of 5/4, then for the third episode after the a tempo 4/4 ‘Moving’ On’ episode the metre changes to 6/8 and then to 4/4 for the ‘Movin’ On’ interlude then to 3/4 for the scat interlude,  and so on  through metre and tempo changes until the final episode, when it elides into swinging 4/4 for a pleasing sense of resolution.  Throughout, Miss Carter’s  approach to scat draws on an astonishing variety of phonemes (i.e. vocal sounds) derived from consonants  (the mostly commonly drawn upon being sounds beginning with B, D and M), from plosives to frictives (by far the largest group of English consonants) and from nasals to glides that are all woven into scat singing of great rhythmic and timbral cohesion — note that Miss Carter’s scat often seems to take flight by  singing in a different metre to her trio (often making use of using crotchet, or quarter note, triplets). 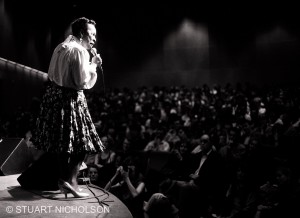 The Audience and Betty Carter

Her remarkable ability to handle the slowest of tempos on ‘I Think I Got it Now,’ ‘Everything I Have is Yours,’ ‘Can’t We Talk it Over?’, ‘Either It’s Love or it Isn’t’ and ‘Spring Can Really Hang You Up Most’ reveals an astonishing rhythmic and dynamic control. At these tempos any weakness in intonation, time and technique would be ruthlessly exposed — it is these challenging tensions she imposed on herself that gave her performances such a sense of danger and drama. 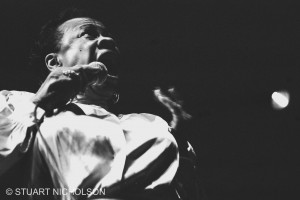 In contrast is her arrangement of the ‘Trolley Song’ — arranging was an art she learned under Bobby Plater’s wing when she was with Lionel Hampton between 1948—51 — with its clever changes of tempo and metre. Much credit on this album goes to her exemplary sidemen, John Hicks on piano, Curtis Lundy on bass and Kenny Washington on drums, who handle the contrasting 3/4 and 4/4 sections and a sudden double tempo sprint by Hicks so effortlessly, as well as their playing on ‘So’ and ‘Tight,’ which, as the latter implies,  demands tightly integrated group cohesion. 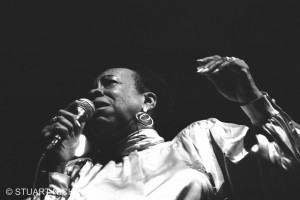 An album highlight is her version of ‘My Favourite Things,’ which is as demanding of her trio as it is of Miss Carter herself. It is a performance that can be returned to time and again, with each fresh listening revealing a little more of its complexities such as her Ahmad Jamal-like  insertion of her own episodes within the basic form. The A section  is taken in a brisk 3/4  while the B section is in 4/4 and this contrast in meter is sustained throughout. When we reach the 4/4 coda (when Miss Carter alters the form, again, with a repeated 8 bar  episode ‘I simply remember my favourite things’ leading to a repeated ‘And Then’ and ‘I Don’t Feel’ to climax) listen to how Hicks’ comping eventually blossoms as counterline to Miss Carter’s singing — who can say which of the two lines predominate? This performance — indeed, this album — soars above the limiting arguments of the validity of jazz singing or the criteria by which it is judged. It is quite simply jazz of the highest order and that is enough. 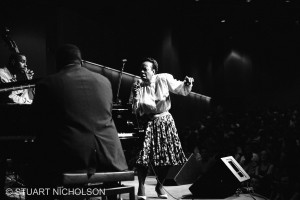 Betty Carter died on 26 September 1998 and although she did not enjoy the sort of fame enjoyed by an Ella Fitzgerald, a Louis Armstrong or a Sarah Vaughan, her singing was the very essence of jazz itself, her towering, yet uncompromising, talent as majestic in her own way as Ella or Sarah. It remains a fact that there are some inside jazz and plenty outside  who have never heard of Betty Carter, so to find out more about this remarkable artist, William Bauer’s biography Open the Door: The Life and Music of Betty Carter comes highly recommended.