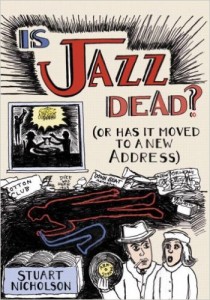 In 2015, Chapter 8 of  IS JAZZ DEAD (OR HAS IT MOVED TO A NEW ADDRESS) — ‘The Nordic Tone In Jazz’ —   was anthologised by  Robert Walser in KEEPING TIME: READINGS IN JAZZ HISTORY  (Oxford University Press, New York, 2015, 2nd Edition), described as ‘The single most valuable jazz-history resource (print or otherwise) available today.’

‘Stuart Nicholson’s book Is Jazz Dead? (Or Has It Moved to a New Address), came out in 2005. The polemic and entertaining essay soon became an oft-quoted, highly influential text which ended up playing a major part in the renaissance of Nordic jazz.’ FINNISH  MUSIC  QUARTERLY (Finland)

‘A definitive account of the state of the art.’ THE OBSERVER MUSIC MONTHLY (UK).

‘Stuart Nicholson provides an admirably clear-sighted and culturally-sophisticated examination of recent developments in the US and Europe, while also pointing to a wealth of excellent music for the reader to go in search of.’ INDEPENDENT ON SUNDAY (UK)

‘Nicholson’s thesis is important, and he supports it persuasively…In explaining globalization (and ‘glocalisation,’ wherein artists incorporate their own national imagery and folklore and culture into the language of jazz) that Nicholson is best. For ethnocentric Americans who need help finding great, style-making jazz beyond our shores, Nicholson’s guidebook is invaluable.’ JAZZ TIMES (USA)

‘There is no doubt that this is one of the most important books about jazz. Nicholson demonstrates a solid knowledge and deep understanding of different countries’ jazz traditions. Globalization theories are pedagogically explained in a way that is easily understood by the reader. It is easy to be convinced by Nicholson’s thorough discussions, since his analyses are balanced and well written.’ JAZZNYTT (Norway)

‘One of the great contributions to jazz literature.’ JACK REILLY, jazz pianist, composer, and former Chairman of Jazz Studies at the New England Conservatory, Boston (USA).

‘The author is very well informed. He has a deep insight into the music.’ INTERNATIONAL ASSOCIATION OF SCHOOLS OF JAZZ, Newsletter March 2007 (Holland)

‘Easily the most perceptive and stimulating critique of jazz for a very long time indeed.’ FLY.COM (UK)

‘A thorough analysis of the forces that have – or have not – been in motion since the death of Miles Davis in 1991 in American jazz…Nicholson is far reaching – and when he compares the films of Bergman to the Nordic Tone he has a brilliant point.’ DAGENS NYHETER (Scandinavia’s biggest circulation daily).

‘The undoubted merit of Nicholson’s book lies in its evaluation of European jazz. It is a testimony of the fact that Europe has left the period of imitation far behind and that the musicians on the continent have now reached maturity.’ JAZZ FORUM (Poland)

‘Nicholson constantly establishes relationships between the social-politic reality and culture -art developments. His last paragraph is so brilliant that it becomes an invitation to reflect/wonder. An open door which most followers/fans should cross more often.’ TOMAJAZZ.COM (Spain)

‘The issues Nicholson addresses are vital issues that should concern any of us who are interested and care about the survival and future direction of this music. It’s useful and enlightening to read how the global jazz fraternity is dealing with the ever changing realities confronting the music’s survival. Bravo and thanks for writing it!’ MIKE NOCK, jazz pianist, educator,  Sydney Conservatorium and member of  the Music Council of Australia (Australia).

‘Nicholson’s arguments both refreshing and inspiring… At a point in time where there are so many contrary opinions and viewpoints surrounding the state of jazz, where it’s headed and what it even means anymore, Nicholson’s book is a spirited and insightful read that seems determined to understand the music as a concept rather than simply as a tradition packaged neatly in a single word.’ SHEPHERD EXPRESS.COM (USA)

‘Your book will stand the test of time, as all your writing does. It is very sobering, but I feel great because I understand EVERYTHING you say!’ BOB BELDEN, jazz saxophonist, arranger, composer, Blue Note recording artist, record producer and eight times Grammy winner (USA).

‘There is no other book that treats all the elements that Nicholson has drawn together so thoroughly and well. It is quite essential.’ SYDNEY IMPROVISED MUSIC ASSOCIATION (Australia’s leading contemporary jazz organization)

‘A very good and well written book with lots of research and ideas to absorb, Nicholson continues to demonstrate he is one of the most scholarly jazz and jazz rock writers around, covering the state of jazz at the end of the 20th Century and moves into the new millennium. He is still a most readable writer too… This is an important book on music, with a heap of emphasis on jazz but applicable beyond the boundaries of jazz to other musical genres.’ PROGRESSIVE ROCK FORUM (progarchives.com)

‘This book is a seminal contribution and for that Nicholson must be congratulated…the central argument is that that there is a developing jazz scene outside of the US. Nicholson carefully articulates this argument with the appropriate evidence. The book is well researched, is eloquently written and well structured.’ AMAZON.CO.UK

‘A serious and passionate discussion about jazz’s future…An art form which ought to constantly investigate the new needs voices like Nicholson’s to remind us of its purpose.’ THE INDEPENDENT (UK)

‘Deeply researched, provocative, well written, with a touch of the British sense of humour, this book will open an infinite debate about jazz in the new century. A must for every jazz lover.’  JAZZIT (Italy)

‘In this provocative book, British jazz critic Stuart Nicholson asks whether jazz is dead (or at least in a state of decay) in the US, then arguing innovation is more likely to be found in other countries, especially Europe. Nicholson is at his most persuasive when listing the factors that have stifled innovation in American jazz over the last couple of decades.’ THE AGE (Australia)

‘A new book by the British jazz critic Stuart Nicholson, Is Jazz Dead? (Or Has it Moved to a New Address), makes a timely examination of [global] developments. Nicholson uses “glocalisation”, an ugly but useful word, to describe the interaction of global and local musical practices.’ THE AUSTRALIAN (Australia)

‘Stuart Nicholson’s Is Jazz Dead? Or Has It Moved to a New Address is a smart analysis of contemporary jazz.’ GUIDELIVE.COM (USA)

‘Stuart Nicholson has written a powerful counterblast against those who want to place jazz in a mausoleum. Anyone who cares about the future of jazz as a vital and innovative art form should read this book.’  THE INDEPENDENT (UK)

‘In Stuart Nicholson’s recent book Is Jazz Dead? Or Has It Moved to a New Address, he talks about the “glocalization” of jazz – a combination of globalization, as jazz is disseminated around the world, and localization, as it takes on “national imagery, folkloric and cultural concerns that give the music relevance to its ‘local’ musical community.” When [pianist] Bobo Stenson plays, it is all there.’ THOMAS CONRAD, JAZZ TIMES (USA)

‘The most recent emancipation of European Jazz from its American role model began after the turn of the millennium. Stuart Nicholson’s report for the New York Times and his subsequent book Is Jazz Dead? (Or Has It Moved To A New Address) caused outcries with his allegation that European jazz is more advanced in Europe than in the USA…which for American ears sounds like ‘The Russians are coming.’” DER SPIEGEL  (Germany)

‘One of the most provocative essays yet on jazz as a global style, and its economics, post–Lincoln Center.’ THE BOSTON PHOENIX (USA)

‘An excellent review, even though slightly dated (a new edition is needed!). Great and unflinching critique of Marsalis and the Young Lions, and excellent chapters on future jazz/jazztronica, various homegrown varieties of glocal jazz and specifically the Nordic tone–all among my favourite musics. No, jazz is not dead at all, and even in the USA it has revived somewhat since this was published. But it has gone through yet more transformations in the last decade, of course: which is the way it should be.’ GOODREADS.COM (USA)

‘A very good perspective (even if not exactly up to date since it’s from 2005) on the health of jazz music. The part which criticizes the conservatism of American jazz (and especially targets Wynton Marsalis) is pretty good, as well as that on the European jazz. All in all, a comprehensive orientation and guide to the contemporary world of jazz, helpful to go beyond the ‘60s and understand a music which is definitely worldwide – rather than just American.’ GOODREADS.COM (USA)

Is Jazz Dead (Or Has It Moved To A New Address)? Has Been Cited In Numerous Published Academic Papers Including*:

*Details from Researchgate.net and SemanticScholar.org