After playing two shows on the 17th and 18th February at New York’s Iridium jazz club, guitarist Larry Coryell died peacefully in his hotel room on Sunday 19th February. Among the first to experiment with combining the rhythms and electronic tone colours of rock with jazz improvisation in bands such as the Free Spirits, he joined Gary Burton’s quartet (1967-8), appearing on a number of seminal albums such as Duster, Lofty Fake Anagram, In Concert and A Genuine Tong Funeral. 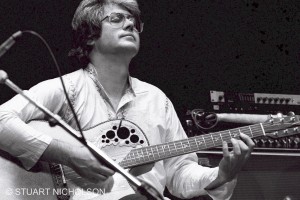 Perhaps his most important album during this period was Spaces, recorded in late 1969 with John McLaughlin which genuinely suggested the aesthetic and musical potential of a jazz-rock union with Chick Corea on electric piano, Miroslav Vitous on bass and Billy Cobham on drums. He was a member of Foreplay with Steve Marcus on tenor sax (1969-73) and  formed Eleventh House in 1973. In the group were Randy Brecker or Michael Lawrence on trumpet, Mike Mandel on keyboards, Danny Trifan on bass and Alphonse Mouzon on drums and albums such as Introducing Eleventh House (1974) with the dazzling “Birdfingers,” and Larry Coryell & Eleventh House at Montreux (1974)  contain moments of breathtaking musicianship. Even though he was one of the most original guitarists in jazz, in later years he struggled to find an effective context for his playing, appearing  in acoustic and straight-ahead contexts, experimenting with Indian music but jazz-rock remained his first love and the music that defined him, and he had planned an extensive 2017 summer tour with a reformed The Eleventh House. In more recent years his writing embraced broader horizons with original operas based on Leo Tolstoy’s War and Peace, Anna Karenina and James Joyce’s Ulysses.