Fusion-meister Lee Ritenour creating a forgotten jazz classic? Well, Stolen Moments is exactly that. On it he draws on the formative jazz influences of his  teenage years when his father took him to see Wes Montgomery, Joe Pass and Kenny Burrell at the Lighthouse on Hermosa Beach Pier and Freddie Hubbard, George Benson and many others at the Concerts by the Sea on Manhattan Beach Pier.  And it’s also a reminder that this talented kid was informally tutored by Joe Pass and Howard Roberts before his career took off with a recording session at age 16 with the Mamas and Papas and going on to accompany Lena Horne and Tony Bennett at age 18. Subsequently he’s appeared on over 3,000 record session with the likes Pink Floyd (The Wall), Steely Dan (Aja), Dizzy Gillespie, Sonny Rollins, Joe Henderson, B.B. King, Frank Sinatra, Simon & Garfunkel, Ray Charles, Peggy Lee, Aretha Franklin and Barbra Streisand. 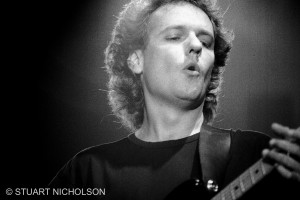 But Ritenour never forgot his jazz background and in 1990 took six weeks out to immerse himself in pure jazz playing to produce Stolen Moments. But after a sequence of 18 commercial albums under his own name, jazz fans were rightly entitled to  put the CD into their players, fold their arms and say, “Okay. Impress me.” And Ritenour promptly does. But he also does something more — he inadvertently highlights what a loss his great talent has been to jazz by his career choice to pursue more commercial endeavours in fusion, pop rock and the blues. 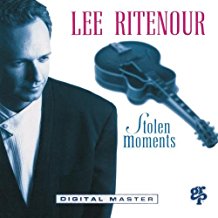 In preparation for the album, Ritenour returned to the guitar of his teens, the Gibson L5 Electric, saying of his practising regime, “I made sure I didn’t come up with too much cliché and created solos that built and had a climax; a beginning, a middle and an end, which, of course, is the traditional jazz story of life.”**

Together with Ernie Watts on tenor sax, Alan Broadbent on piano, John Patitucci on acoustic bass and Harvey Mason on drums, Stolen Moments comprises four originals and four standards (that include the title track and ‘Blue In Green”). Recorded live in the studio in two days, Ritenour recalled, “It was just like jamming in the living room. When you’re doing ballads like ‘Blue In Green’ you need that interplay. The tempos are changing, you need to see each other and feel each other.” 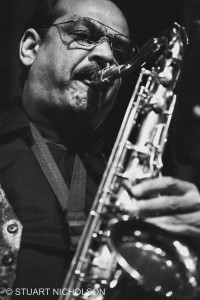 Among the album highlights is the opener, “Uptown,” an original by the guitarist. “I wrote that tune last,” says Ritenour. “I kept looking for an uptempo one because I didn’t have one and I didn’t want the album to come out too soft. Some tunes, like ‘Impressions’ I thought were better suited to a horn than a guitar and I didn’t have anything until about a week before the project, and then I came up with that.” It took ten takes, and is largely based on the ‘Impressions’ / ‘So What’ modal sequence (albeit changing the AABA sequence to AAB+Transition with B extended to 12 instead of 8 bars). The result is impressive, with Ritenour signing-in with a solo dispelling any notion that his foray into jazz was going to be light-weight “jazz voyeurism.” This guy can play. 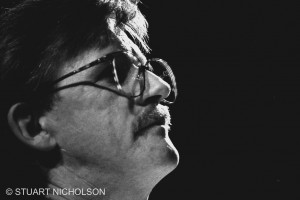 Another original, “Waltz for Carmen,” written for his then fiancé, plus “Haunted Heart” highlight his mastery of the ballad performance and each was completed in one take. The rest took about five or six. “24th Street Blues” —his tribute to Wes Montgomery — has altered blues changes that elide from 4/4 into 3/4 at the chorus endings. On it, Ritenour references   Montgomery’s use of octaves, but moves to a single note line during the second part of his solo where he remains his own man, creating a solo that   lifts the piece into another gear, something Watts picks up on and develops towards a powerful, memorable, climax. As an aside, listen to the conviction of Patitucci walking on this piece. 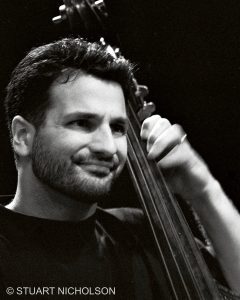 Reflecting on the session later Ritenour said, “The biggest difference between fusion and jazz is there really isn’t room to take scales too far out in the fusion stuff. With the jazz album, I had all the freedom in the world. That was probably the biggest challenge because I wanted to make sure I didn’t play a bunch of b.s., that it really had a lot of substance. That’s probably where I did my homework the most.”

Artistically and aesthetically this album may be Ritenour’s finest album to this day (it was recorded in 1990).  It’s an excellent example of post-bop jazz at its best covering a wide range of moods and tempos  with excellent performances by the powerful and authoritative Ernie Watts revealing what a hugely underrated talent he was (and continues to be) while Alan Broadbent sustained his reputation for consistent excellence (as he and Watts later displayed in Charlie Haden’s Quartet West). John Patitucci’s bass lines were constantly inspiring and drummer Harvey Mason always seemed to do precisely the right thing at precisely the right moment.

As a footnote to this minor post-bop classic, a video came out in the summer of 1990 called Lee Ritenour and Friends that shows him performing “Stolen Moments,” “24th Street Blues” and “Uptown” in concert amid a set of his fusion hits. And on three rainy nights in 1997 at the Ash Grove on the Santa Monica Pier in Los Angeles, Ritenour was recorded playing a mix of fusion, Brazilian influenced music and jazz on the album Alive in L.A.

Wes Montgomery  is referenced by way of the opening track, “A Little Bumpin'” — signifying on Montgomery’s album Bumpin’ released by Verve in 1965 but no Gibson this time, sounds more like a Stratocaster — albeit with a relentless fusion backbeat. Montgomery’s signature octaves are again a feature of the fusion pieces “Night Rhythms ” and “Boss City” but the mood changes with  acoustic versions of “Uptown” (a totally different solo to that on Stolen Moments) and “Waltz for Carmen” (subtle electronic keyboard shadings). “Wes Bound” is  another Montgomery-meets-fusion piece while the final track, “4 on 6,”  is a brisk straight-ahead feature that has a neat but understated solo from Ritenour leading into  a feature for the saxist on this session, Bill Evans, in duet with drummer Barnaby Finch.

Taken together with moments from the four albums he made with the band Fourplay, with keyboardist Bob James, bassist Nathan East and drummer Harvey Mason, they collectively underline how Stolen Moments was no one-off fluke. Not for nothing is his nickname Captain Fingers. 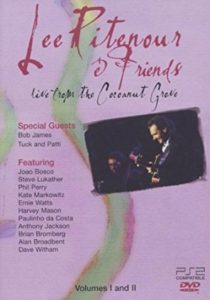 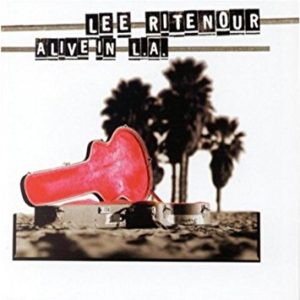