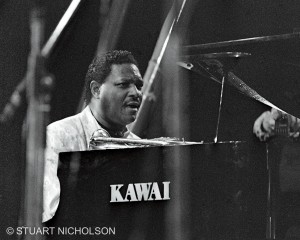 When McCoy Tyner recorded Enlightenment” at the Montreux Jazz Festival on Saturday, 7th July 1973, it preserved on disc what he would later refer to was “One of my best performances anywhere.” It was without a doubt a memorable performance, producer Orrin Keepnews noting that, “The artist recognised this, and so did the musicians on hand and the capacity audience in the concert hall.”  What we hear is the coming of age celebration of a true jazz great.

After McCoy Tyner left the John Coltrane Quartet in 1965, his career stalled. His departure coincided with the rise of rock music in the late 1960s, which had the effect of dramatically squeezing work opportunities in jazz. Like many at the time, Tyner was forced to take day jobs to make ends meet, including a period of taxi driving, and working as an accompanist for Ike and Tina Turner and Jimmy Witherspoon. It was a period that only served to heighten his artistic uncertainty, something he described to me in an interview in October 1997, “I was really riding a tremendous wave when I was with John; it was my school, my university. I developed a lot working with him, but it took a while after I left him to get settled and find a perspective. When I left it was like coming down off a mountain top. I had to settle down, I recorded standards [Time For Tyner] and it was a different kind of feeling. An artist has to reflect what he feels at a given time and that was how I felt after that past experience.”

After five years of struggle, producer Orrin Keepnews signed him to Milestone Records. His first album for the label, Sahara, recorded in January/February 1972 re-established his career, winning the 1973 Downbeat Critics Poll as Record of the Year and receiving two Grammy nominations. While the album is notable for its long (23 minutes) title track and his abstracted alleluia, “A Prayer for My Family”, what is immediately apparent   is the seeming transformation in his playing — there was a greater drive and intensity in his playing than on any of his previous albums under his own name for the Blue Note or Impulse! labels. While his virtuosity was less masked, it was the ends to which he put it that was so arresting. He favoured modes and pentatonic scales as the basis for his original compositions, made use of deeply layered harmonies, polytonality, pentatonicism and a use of dissonance that had taken account of Cecil Taylor. His playing was less linear than his previous albums, the emphasis more on clusters of sounds contrasted by long, semi-quaver runs, crashing cadences and rumbling ostinatos and he had also taken account of African and Latin elements in his music. The force of his attack made his quartal and quintal voicings appear as dense, shimmering structures — indeed, overall his playing had acquired an almost spiritual intensity. It was if the elements that characterised his playing with Coltrane had been magnified to the power of ten. Sahara was followed by Song for My Lady and Echoes of a Friend from 1972, and Song of the New World from 1973, by which time the fluctuating personnel of his regular working group had consolidated with Azar Lawrence on tenor saxophone, Joony Booth on bass, and Alphonse Mouzon on drums. 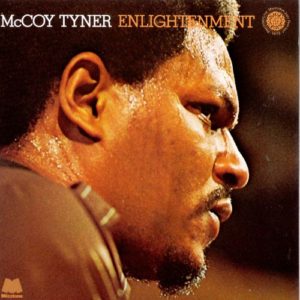 Enlightenment was recorded against a background of jazz-rock when it seemed  as if every pianist in jazz was turning to the electric piano. Tyner chose to swim again the prevailing trend, remaining steadfastly acoustic, and, as he shows here, was able to make a Steinway roar without amplification. The album captures the full visceral impact of his playing in a way that his previous three studio recordings, all nevertheless important, did not. On it, Tyner emerges with a voice, that in terms of its emotional force and spirituality, many argue was an equal of Coltrane’s own. The centrepiece of the album is the three part “Enlightenment Suite” but the album’s high spot is the 25 minute, “Walk Spirit, Talk Spirit”, which captures the key elements that he had now brought together in his playing.

A long, discursive solo from Booth leads into Tyner’s dramatic entry, greeted by the audience with a roar usually associated with soccer stadiums, that sees him playing a repeated two-bar ostinato that is the basis of the composition, over which Lawrence — a still immature Coltrane-influenced saxophonist — plays a repeated four bar melody that leads into a crashing cadence point and a return to the theme. The piece breaks down as follows: 4 bar intro + A 12 bars + A 12 bars + B 8 bars + four bar interlude + A 12 bars + A 12 Bars + B 8 bars to solos. The A sections are not strictly 12 bar blues, while the B section (6 bars of C/D7 followed by two bars G/A7) could also be regarded as an interlude. Lawrence steps into the solo spotlight first, his energetic approach firmly establishing a groove, but it is Tyner who follows that captures our imagination.

Like Coltrane often did, he begins his solo with an intensity that was almost superhuman. Beginning with a pattern based approach, he increases the energy of his playing with his dense, swarming virtuosity that makes extensive use of pentatonicism, chromatic runs, crashing basso profundos and sideslipping. Sideslipping — effectively playing “outside” the chords to introduce bitonality (or two tonalities at once) — serves to further increase the tension his playing is creating. He had already demonstrated his mastery of this technique with Coltrane and under his own name on “Passion Dance” from The Real McCoy (Blue Note), but on Enlightenment it emerges as an important element of his style. Most commonly he achieved this “outside” feel by playing a semitone away from the underlying tonality, which, while achieving a dissonant effect, allows the ear to relate to the underlying harmonic base and conceive logic in the dissonance. Equally, Tyner’s darting chromatic runs offered a further sense of harmonic ambiguity since chromatic scales belong to every chord and yet none. 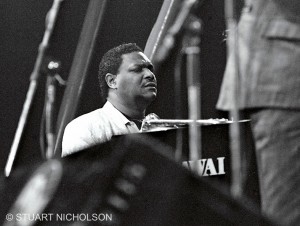 As Tyner’s solo on “Walk Spirit, Talk Spirit” continues,  the rhythm section drops out on cue as he spins into a feverish Cecil Taylor-like interlude. Although he seems to veer into free time, the two bar motif continues to play in Tyner’s mind, his elaborate fantasia in surreal counterpoint to a pulse imagined rather than stated becomes a swirling brew of polytonality, pentatonicism, angular dissonance and percussive accents. Then Tyner abruptly restates the two bar motif, and re-entering the song a tempo as the piece works through to its conclusion via a piano/sax duet.

Hitherto, there had been nothing in Tyner’s discography to suggest the frightening intensity we hear in his playing on Enlightenment. “I felt very good that night,” he told Jazz Forum. “The people came to listen and they gave me back something that was necessary to make the music a success.” In July 2017, saxophonist Azar Lawrence also recalled the occasion for jazz blog: “So after we perform, McCoy got up off the piano and ran over to me and I was like, ‘Oh shoot.’ He said, ‘Man this was the best recording I’ve ever done. And my best performance. My best performance of my life.’” Overall, Enlightenment is a genuine tour de force and a memorable highpoint, not just  of 1970s jazz, but of jazz itself.