Was The Way Up  the Pat Metheny Group’s parting shot? Released in 2005, we’ve heard nothing on record from them since. If it was their last album, then they certainly left on a creative high. In scale, ambition and execution, it remains Metheny’s magnum opus — or greatest work. In many ways it was a culmination of of what the Pat Metheny Group was all about. In the past, the guitarist has spoken of the challenge integrating improvisation and composition and how it was “one of the most treacherous areas in jazz,” adding the principal creative challenge with the Pat Metheny Group was that of constructing a context for improvisation that provided “a certain kind of drama in the music.” 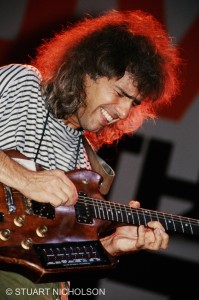 Metheny has argued that all thirteen Metheny Group albums should be viewed as “one long set” and the realisation of The Way Up, a 68 minute through composed work — meaning the music is continuous with no sections repeated — illustrates this in the way it evolved from what had gone before. As Metheny pointed out to me in an October 2004 interview, his 1981 collaboration with Lyle Mays on As Falls Wichita, So Falls Wichita Falls can now be seen as a kind of foundation stone for The Way Up. It was, he explained, “Where we started to abandon the idea of songforms, replacing it with compositional development, but also going at the textural opportunities that were being presented us at that time.”

The next important building block was the title track of 1984’s First Circle with the Pat Metheny Group where Metheny and co-composer  Mays took a significant step forward with their successful management of a complex extended structure as a framework for jazz improvisation. The key element of “First Circle” was that despite its sophisticated ad hoc compositional form, it didn’t sound complex, rather it drew the listener in to the narrative arc of the performance through what can only be described as a  cinematic element in Metheny’s writing. He called this “The trip factor,” where listeners are drawn in to a musical journey whose landscape is ever changing until the destination is reached.  Another important factor  was how Metheny was beginning to take account of composers such as  Steve Reich and Terry Riley whose influence is felt in the rhythmic complexity underlying ‘First Circle’ — Stuart Greenbaum has completed a detailed analysis online of how the rhythmic cells in this piece function.  In 1987, Reich invited Metheny to perform “Electric Counterpoint” on his seminal album Different Trains. 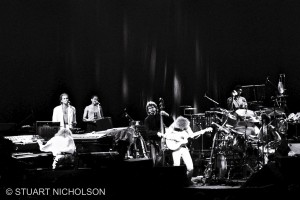 Metheny’s two subsequent albums, Still Life (Talking) from 1987 and Letter from Home from 1989, together with First Circle, complete a trilogy of albums Metheny noting, “Pretty much every tune on those records, if you look at the structure of them, there’s at least three or four points along the way where it goes beyond the head solos head thing you find in the straight ahead environment.” We also see Metheny delving deeper  into rhythmic complexity on Letter from Home — the fifty-five second track “45/8” presents a rhythmic pattern that breaks down as (6+6+6)+4+(6+6+6)+5 — i.e. 45 “8th notes” or quavers — while “5-5-7” is a rhythmic scheme comprising two bars of 5/4 and one of 7/4 (albeit solos are on a regular 6/4 metre). And listen out for the the marimba ostinato on “Minuano (Six Eight)” from Still Life (Talking) — shades of the impact the marimba had when it enters towards the end of Reich’s Drumming.

The final stepping-stone on the way to The Way Up was Imaginary Day  (1997), where Metheny looked at another form  of minimalism in Balinese Gamelan music on the title track and “Into the Dream,” observing, “Imaginary Day  was a record where we really wanted to have the record come together almost as a kind of trip, sort of thing, and it wasn’t completely conceived that way but after the fact we sort of saw, yes, this could be a sort of a story type record from the beginning to the end.”

Metheny says that once this challenge of telling a story through individual compositions had been successfully negotiated (the album picked up two Grammy Awards), he and Lyle Mays felt they were ready to try and create a similar narrative arc within the context of a single composition that lasted the length of a CD,  “Lyle and I felt, well, okay, we can go back to where we were around the time of, or towards the end of Imaginary Day where we were going towards this idea of how far can we push the form thing.  Lyle and I said now’s the time, we’ve been going towards this anyway, we’re going to use the recorded medium for what it is and write a piece that takes up the whole CD. That process of writing took about six weeks of he and I just sitting in a room together.” 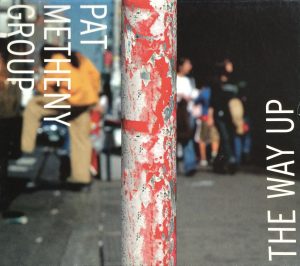 Its perhaps no surprise Metheny thanks Steve Reich in the liner of The Way Up — Metheny has referred to “pulsing,” an important aspect of Reich’s music in the way he brought a pulse into experimental music, for example, Hand Clapping — and  the way a huge diversity of rhythmic possibilities can be derived from a single rhythmic cell has surfaced in the Group’s recordings from First Circle.

Although the recording is cued on the CD as “Opening,” “Part One,” “Part Two” and “Part Three,” this is not a “symphony” in four movements; they are simply there for listeners to navigate their way around the album without extensive fast-forwarding or fast rewinding on a single track that lasts 68 minutes 10 seconds.

“Opening” is initially episodic, “I think the detail of the compositions is also something that would strike the general listener pretty much right away,” says Metheny.  “There’s little melodies that show up at the beginning that keep recurring that are actually − everything comes out of this piece. It’s foreshadowed and then developed, foreshadowed and then developed, and what happens in that first chunk is a statement of purpose.”

“Part One” presents the exposition of the main theme, “‘That ‘Part One’ melody, the little thing you hear at the beginning of the record is the first time you hear it,” explains Metheny. “That now becomes a thematic element and a harmonic element that keeps getting developed through the piece, the melody that people will come away whistling. For most people, the melodic entry point of anything is something that has a lot of gravity to it, and that ‘Part One thing’ is what people will remember most from this one.”

“Part One” also includes episodes of polyrhythmic complexity — there is a marimba, favoured by Reich, for example,  Six Marimbas — that plays an ostinato passage in  9/8, but the key moment comes with an impressive a straight ahead section featuring lucid solos by Metheny, Mays and trumpeter Cuong Vu (at around 18 mis 30secs). After the conclusion of a drum solo by Antonio Sanchez “Part One” then elides into “Part Two.”  After a tranquil episode, “Part Two” yields further examples of Metheny’s virtuostic talent — this album containing some of his finest playing on record — as the direction of the piece moves through shifting moods, including a Gregoire Maret harmonica solo and an episode that brings to mind Terry Riley’s In C, and heads towards  the climactic “Part Three” with its recapitulation of the main themes and motifs which are developed and extended even further, Metheny observing, “Things that would normally go on for a little while and then that’s that, just keep going and going and that’s something we’ve always loved anyway, really taking ideas and milking them to their extremes in a way.” 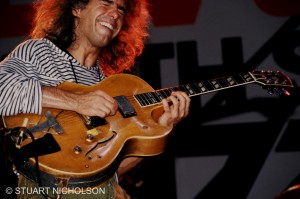 Today, industry insiders are predicting the demise of the album-long statement that originated with the advent of the 33 1/3 long playing record, “The album is dying in front of our eyes,” says industry commentator Bob Lefsetz. “No one’s got time to sit and hear your hour plus statement.”  Such comments provoke a wry response from Lyle Mays, who told Jazz Times, “I’m hyper-aware of what I consider the artificial lack of time that’s been imposed on life. You turn on the TV and within a few seconds you’re going to hear, ‘Well, that’s all the time we have.’ I don’t know why time is in such short supply. Where did it go? Who’s keeping all the time from us?”

In such a context, The Way Up emerges as a something more than a major statement by a major jazz musician, it is also akin to the proverbial canary in the coal mine — if this album, a major achievement not just in jazz but contemporary music, becomes forgotten, then we are all well and truly victims of the instant gratification society that is dumbing the values of culture and the arts. It’s something  Metheny feels strongly about, as he explained to me in no uncertain terms: “For us, The Way Up was kind of a protest record. About how everything is getting shorter and shorter and smaller and smaller and less ambitious and less detailed and less nuanced, and how the world is just crumbing in its aesthetic ambitions. We both felt — Lyle and me — that we’ve spent so much time in this band, working against those things let’s write a piece that’s really for us, our own little slice of reality, the opposite of those things, something that bites against the sort of status quo in what’s happening in jazz,  what’s happening in the incredibly weird world we’re living in and hopefully in a very small way can show an alternative way of thinking, of looking at all we value.”