By 1983 Steps Ahead — a cooperative quintet with Mike Mainieri on vibes, Michael Brecker on tenor sax, Eliane Elias on piano, Eddie Gomez bass and Peter Erskine on drums — had developed a collective identity quite different to any group in jazz. That year, their first U.S.  album was released in the States  (they had previously recorded three albums for the Japanese market only). Surprisingly, the response was lukewarm — Downbeat  only awarded the album three and on half stars, for example — yet in contrast, in Europe the group was hailed as “The band of the 1980s.” And for many it was. 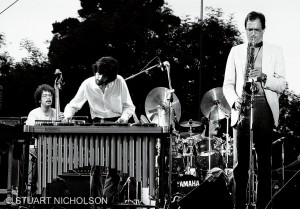 Here in the United Kingdom, leading contemporary European saxophonists Tim Garland and Tommy Smith have spoken of how Steps Ahead was one of the most influential albums of its time whose influence continues to the present day. Yet in America, the initial response to the music was one of confusion. Critics wanted to know what to call their music, as Mike Mainieri told me in 1997, “They didn’t think we were serious,” he said. “There’d been dozens of ‘all star’ albums by studio musicians who refused to go out on the road, then the media was pretty apathetic, nothing in the New York Times or the Village Voice.” 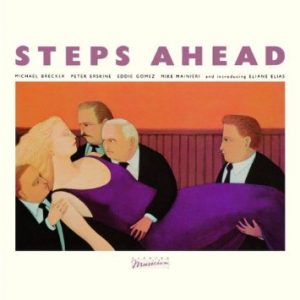 Today, it seems remarkable that such an accomplished band with their own unique sound signature should have encountered such a response and struggled to find work in the US. Maybe this was because they refused to comply with the traditional jazz swing feel in 4/4. Although Mainieri had been musical director for Buddy Rich, Eddie Gomez had been Bill Evans’s bassist, Peter Erskine had featured with the Stan Kenton big band  and Brecker had played in Horace Silver’s quintet, all had done the “swinging 4/4 thing” and felt  it was now time to move on to something different and challenging. 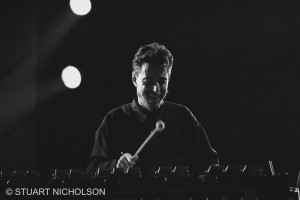 Today, the tune most associated with  the band  was the Don Grolnick composition “Pools,” and although it is in 4/4, it does not comply with the traditional 4/4 swing feel. The form is a simple AAB structure, with the A sections 20 bars and the B section 14 bars. The initial exposition of the theme in the minor is by Gomez, who carries the melody,  against sustained chords by vibes and piano. The drums provide a relaxed funky beat, and when the A section is repeated, Brecker joins Gomez in unison, but on the B section their roles diverge with Brecker carrying the melody and Gomez returning to a rhythmic role. 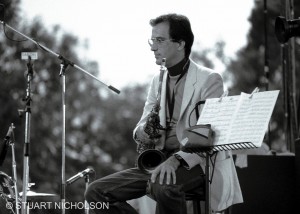 The chorus is repeated, this time with Brecker and Gomez playing both A sections in unison and the B section is as before. Solos then depart from the AAB structure and are based on a four bar vamp. The solo sequence is Brecker, Gomez, Mainieri and Brecker, who are supported by suspended chord riffs from piano and vibes with Gomez and drummer Erskine interacting in increasing rhythmic complexity that matches each soloist’s move towards a climax — on Brecker’s second solo Erskine provides a prominent interactive role in accompaniment contributing to the drama of the moment. And it is the emergence of Brecker on this album as a major soloist in his own right that adds to its significance. Although he had previously featured in the group Dreams, and later with the Brecker Brothers band, here, with Steps Ahead it was clear he had matured into a major voice on his instrument. 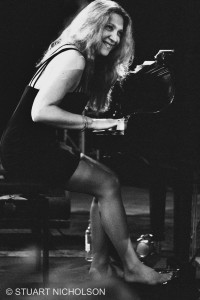 “Loxodrome” provides another example of Steps Ahead’s preference for compositions that do the unexpected — it may be just thirty-five bars in length but has an interesting form, presenting six bars of pre-written melody, eight bars of improvisation over a pedal point, six bars of pre-written melody, another eight bars of improvisation over a pedal point which is finally resolved by seven bars of pre-written melody. The idea here is for the improviser to blur the distinction between the written  and improvised episodes during the initial exposition of the song. Solos then are taken over a repeated two bar vamp. Other compositions, such as “Northern Cross” and “Both Sides of the Coin”  have equally absorbing ad hoc structures, the latter, for example, presents an attractive rondo form comprising 8 bar intro (theme A) + (A + B) + (A + B) + (C + D) + (C + D) + (A + B) + A to solos on a new sequence of chords: 16 bars E + 16 bars E in half-time + 16 bars F a tempo with samba feel. When Brecker solos, he takes three choruses over this new EEF structure before returning to the coda, C + D + C + D + A (repeated till fade). 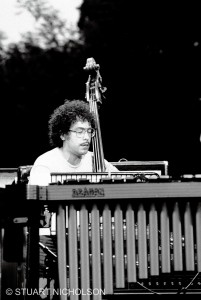 In their diligent application of sophisticated ad hoc song forms combined with exceptionally lucid soloing of a very high standard backed by thoughtful, highly appropriate accompaniment, Steps Ahead offered something new and fresh in the early 1980s. Their unique acoustic poise is captured perfectly on the DVD Live in Copenhagen from 1983, where they offer slightly extended versions of all but one of the compositions on this album, providing an excellent documentation of this band. 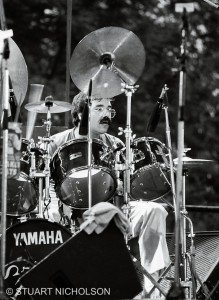 Steps Ahead emerged on the 1980s jazz scene as a one-of-a-kind ensemble whose members each succeed in realising their collective potential while showing great promise for the future. However such challenging ad hoc compositional forms seemed beyond the grasp of most critics at the time, Mainieri wearily noting, “One critic said, ‘It would be great to hear them play the blues, that would help.’ But I’ve played the blues for thirty years, who wants to keep playing the blues? We were trying to come up with new music.”