The Dirty Dozen Brass Band was the first of the post-traditional New Orleans brass marching bands to reach an international audience in the early 1980s. Key to their early success was My Feet Can’t Fail Me Now,  their galvanising debut album from 1984. What took everyone by surprise was the fresh, new spin they gave to a tradition  that hadn’t changed much since the dawn of jazz. By incorporating a wide range of influences from  Thelonious Monk, Charlie Parker, James Brown and Duke Ellington to hip-hop and  unexpected themes  like the Hanna-Barbera cartoon series The Flintstones, they turned the New Orleans marching band tradition on its head.  Initially there was considerable resistance to what they were doing  —“You can’t mix Charlie Parker with traditional New Orleans music,” ‘You’re playing too fast for a marching band” and, most common of all, “You’re ruining the old music” — but the Dirty Dozen were not listening to the naysayers. 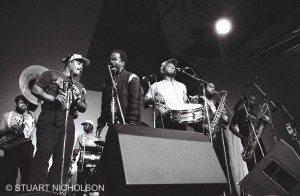 The Dirty Dozen’s music had a feel-good factor that immediately communicated with audiences. As trumpeter Roger Lewis, one of the founding members of the band back in 1977 observed on the Dirty Dozen’s website, “We’ve never been the norm, even though we started out as a traditional New Orleans brass band. In the beginning we weren’t getting work of any kind, so we thought it was okay to explore other music…It’s impossible to think that you can be exposed to the harmonies that Duke Ellington was making, the rhythms coming from Dizzy Gillespie or the funk being done by James Brown, and then ignore it when you’re playing New Orleans music. New Orleans music is all of that. If we had chosen to just put in the music presented to us then as traditional, it would have stunted our growth. Being more than what we heard is what the band was about.” 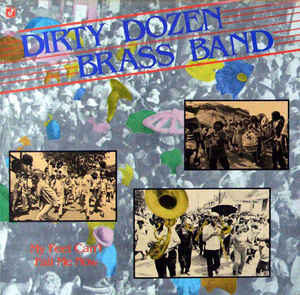 Central to the band’s rhythmic appeal was the sousaphonist Kirk Joseph  who is front and centre throughout My Feet Can’t Fail Me Now, the fulcrum on which the music balances — in a band of equals whose collective impact relied on unity of purpose, he was slightly more equal than others, his playing one of the highlights of the album. Like early jazz, the music may be in 4/4, but Kirk plays with a distinct two-beat feel. This polyrhymic feel is heightened by the use of the Tresillo — a New Orleans clavé — played on cowbell or drum rim. Listen to Kirk’s agile introduction to “Blackbird Special” before the entry of the ensemble with its infectious phonal/antiphonal duality that demands a physical response in return —  tapping your feet, popping your fingers and getting up to dance. 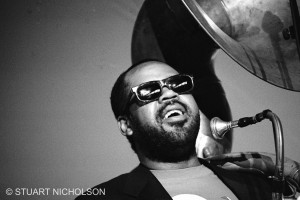 Duke Ellington’s “It Don’t mean a Thing (If It Ain’t Got that Swing)” is one of several tunes that go way beyond the traditional marching band repertoire, convincingly reimagined for the dancing, second line, audience. Kirk’s attention-getting intro to “I Ate Up the Apple Tree” sets the scene for a song with a great party vibe, the vocal inviting the audience to join in on “Allez-oop,”  “Come see about me” and, at the end of each chorus, “I ate up the apple tree.”  Charlie Parker’s 12 bar theme “Bongo Beep” is well beyond the traditional New Orleans repertoire as is Thelonious Monk’s “Blue Monk,” that latter done as a traditional New Orleans Slow Drag (or Funky Butt). In 1937, Ellington’s trombonist Juan Tizol provided him with a hit tune in “Caravan” and here the Dirty Dozen’s growling trumpets tip their hats in salute  to Ellington before “Jumping With Symphony Sid” suddenly joins the party — where did he come from? “St. James Infirmary,” “L’ll Liza Jane” and “Mary, Mary” are more firmly in the New Orleans tradition — listen out for the Tresillo on “Mary, Mary” — while the album highlight must surely be the title track, so popular with  audiences  that the band  put it out as a single  on the Mad Musicians label, coupled with “L’ll Liza Jane.” They’d re-record “Feet’s Don’t Fail Me Now” a few years later, but the original still packs a punch, referencing bebop en route before signing-off with “The Theme,” a la Miles Davis. 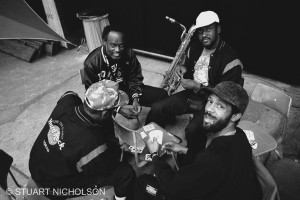 As founding member and baritone saxophonist Roger Lewis observed of the music played by the Dirty Dozen: “It’s a big old musical gumbo, and that probably made the difference, separating us from other brass bands out of New Orleans. It put a different twist on the music. We were not trying to change anything, we were just playing the music we wanted to play and not stay in one particular bag.” Today, the Dirty Dozen are still going strong, they have evolved, of course, and some of the original members are still there. But if you missed this album when it came out thirty-three years ago (1984) it’s a true gem, still retaining that freshness and energy that captured audience’s attention all those years ago. Fun and joy have a right to be expressed in jazz, it doesn’t have to be all existential mind puzzles and angst, as the Dirty Dozen convincingly argue here. 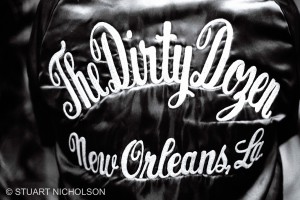