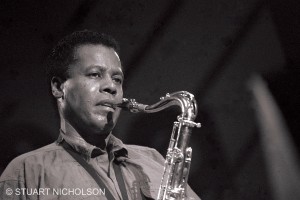 Saxophonist Wayne Shorter first recorded for the Blue Note label in 1959 as a member of Art Blakey’s Jazz Messengers. It effectively brought the 26 year-old to attention of the jazz world. Although he had previously played in the ensembles of Horace Silver and Maynard Ferguson and recorded for the Vee-Jay label, alongside Blakey’s stellar line-up that included trumpeter Lee Morgan and pianist Bobby Timmons, Wayne Shorter came of age.  He also excelled as a composer, Blakey recording several of his originals including ‘Lester Left Town,’ ‘Sakeena’s Vision’ and ‘The Chess Players.’ But it was when he was offered a recording contract in his own right by Blue Note founder Alfred Lion that he really came into his own. The six albums he recorded for the label over an eighteen month period number among the great bodies of recorded jazz from the 1960s. 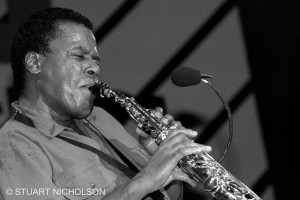 From that point on Shorter seems to have been in the right place at the right time. He was there in the mid-1960s to help shape Miles Davis’ ‘Second Great Quintet’ with his playing and compositions, and then in the 1970s to help define Jazz-Rock as the co-leader, along with Joe Zawinul, of Weather Report. He memorably cropped up on Steely Dan’s album Aja during this period as well, writing himself into rock history with his memorable solo on the album’s title track. Post Weather Report (the band was wound up after fifteen years and sixteen albums in 1986) he put out three intriguing but uneven albums on the Columbia label — Atlantis, Phantom Navigator and Joyrider — subsequently touring and, as it later turned out, recording on tour, with Carlos Santana and touring and recording with a Miles Davis tribute group with Herbie Hancock, Ron Carter and Tony Williams with Wallace Roney in Davis’ stead. In 1994 came the album High Life  and a career that seemed to be winding-down momentarily  perked-up, only flattering to deceive  as he appeared to struggle to put a band together — having ranged from a group with Mitch Forman, Gary Willis and Tom Brechtlein to an all-woman ensemble — that could do justice to his sophisticated compositions .

Then, in 2002 came Footprints Live! his first all acoustic album since 1967, his first album as a leader since High Life and the first live recording under his own name. With Danilio Perez on piano, John Patitucci bass and Brian Blade on drums, Shorter’s career now ignited in a way it had failed to do post Weather Report.  Compositions were used to set tempo, key and mood before being abandoned for the time-no-changes principal of improvisation inspired by the approach memorably adopted on on Live at the Plugged Nickel from 1965 when he was a member of the Miles Davis Quintet. Here was jazz improvisation at its highest level of sophistication. Once again Shorter, then 69 years of age, was thrust to the forefront of jazz. The albums Alegria and Beyond the Sound Barrier followed and in 2013   Shorter returned to the Blue Note label for the first time in 43 years for the album Without a Net. It was a stunning achievement by the then eighty year-old saxophonist, cementing his position at the very top of the jazz pantheon.