Formed in 1986 by bassist, producer and conceptualist Bill Laswell, Last Exit was a free jazz supergroup that took the Freedom Principal to undreamt of highs. Taking their name from the Hubert Selby novel Last Exit to Brooklyn, Laswell’s pet concept at the time was “collision music,” bringing together strong musical personalities and letting the sparks fly.  They certainly flew with Last Exit. There hadn’t been anything remotely like them before, and there hasn’t since.

The two front-men of Last Exit and both masters of the Freedom Principal: Peter Brötmann and Sonny Sharrock

Laswell’s choice of saxophonist Peter Brötzmann and guitarist Sonny Sharrock as the group’s front-men was inspired — their mutual empathy and remarkable hide-and-shriek exchanges were underlined by coruscating interaction. Ronald Shannon Jackson on drums was on a roll at the time with his Decoding Society while three years earlier Laswell had produced Herbie Hancock’s million-selling Platinum certified Future Shock where he played bass on all the songs and co-wrote most of the material, including the Grammy-winning “Rockit,” the album’s big hit. Everyone was at the top of their game, musically, conceptually and creatively, something that was was underlined by their total confidence in each other’s playing — the first time they played together was onstage at their first live gig in Paris. Thereafter they just turned up at gigs with no rehearsal and let rip. 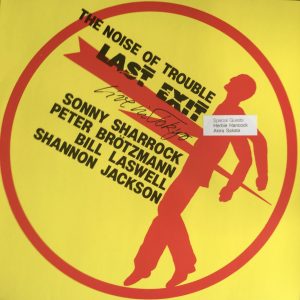 The curious paradox of free jazz  is that total freedom can itself be limiting. Last Exit skirted around the issue by  creating spontaneously conceived, rough-and-ready structures — it could be a blues, a boogie or a collective improvisational interlude that defined its own shape before moving on to the next musical episode, which they did seamlessly, as if guided by some unseen hand. They also had the wisdom experience brings and the good taste not to milk an episode to death simply because it might be going well in the moment, always looking to see what was around the corner, so leaving their audience wanting more. There may be vicarious excitement to be had in being shocked out of your musical comfort zone — don’t forget this was an incredibly LOUD band — but being bashed over the head by gratuitous noise-making without any sense of an ultimate destination can quickly become boring and this band knew it, giving pain and pleasure in judicious measure. 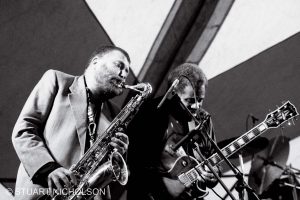 Recorded live at the Pit Inn in Tokyo on 5 October 1986 on the heels of a successful European tour, Last Exit brought spontaneity, energy and a collective empathy that working regularly  together brings. Opening with what was effectively a blues based medley they quickly have the audience, and listeners to the album at home, on-side. Sharrock’s guitar intro on “Pig Cheese” introduces the wow factor this band seemed to turn on at will; “Panzer Be-Bop” reflects Laswell’s impatience with what bebop had become by the 1980s — “musical masturbration” he called it — that offers a jarring counterblast that culminates in a powerful  Jackson drum solo (Jackson knew a thing or two about free jazz, he was Albert Ayler’s drummer from 1966-7). “Blind Willie” demonstrates their credentials as  a band of real free improv heavyweights while Herbie Hancock guests on “Help Me Mo I’m Blind” retaining his post-bop identity amid the musical mayhem around him. Another guest, local altoist Akira Sakata (whose day job was as biologist specialising in the water-flea — well, someone has to) jumps in on three numbers, locking horns convincingly with Brötzmann on “Needless Balls.”

An exceptionally bright, witty and talented man, Laswell  would  go on to remarkable success as a producer in the 1980s and beyond, not least  with Mick Jagger, Motörhead, The Ramones, Iggy Pop, Yoko Ono and Public Image, yet he also enjoyed bringing a band onto the jazz festival circuit each summer, such as Third Rail in 1997 with fellow iconoclasts  Bernie Worrell, James “Blood” Ulmer and others, who didn’t so much break down musical barriers as trample all over them. When I wrote Jazz-Rock: A History in 1998 he willingly found time to write the foreword. In it he spells out his thoughts on what contemporary music, especially jazz,  could aspire to. As a musical manifesto it’s an inspiring vision of what music and its function in contemporary society could be and once you’ve read that, a whole lot more of what Last Exit was doing makes sense. 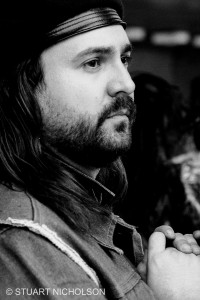 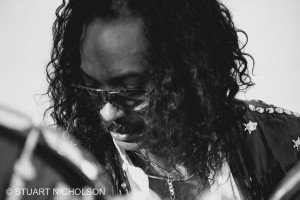